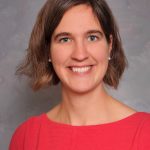 nuske’s career is a healthy and happy mix of research, teaching, and community outreach — and she credits her time as a postdoctoral scholar in the Department of Biochemistry with helping shape that diverse career.

After earning an undergraduate degree in zoology and doing cancer research in the McArdle Laboratory for Cancer Research on campus, she went to the University of Utah for a Ph.D. in oncological sciences. An interest in the work of biochemistry professor Elizabeth Craig’s laboratory brought her back to the University of Wisconsin–Madison from 2007 to 2011.

“I was interested in protein folding and how that is relevant to prion diseases, Alzheimer’s, and other diseases,” says Prunuske, who is originally from the Milwaukee area. “I also had many other interests in things like teaching and outreach and I was able to pursue those and felt supported in doing so. Very few of us have this really clear path so it was great to be able to explore many options and interests.”

During her postdoc, she was involved in scientific teaching and mentoring programs on campus to learn how to be an effective teacher. She practiced teaching in the university’s Biocore curriculum, which she had gone through as an undergraduate. She also was involved in postdoc groups that brought industry leaders to campus to talk about their careers.

“It can be difficult during those years to sit back and reflect on your own passions but also blend that with what jobs are available and skills are in demand,” she adds. “I was able to get involved in teaching and even evaluation research and felt supported to pursue those.”

After her postdoc, she moved to the University of Minnesota Duluth to teach medical students and do research with undergraduates. She also worked with several programs that strived to get more Native American students to pursue doctoral studies or medical degrees.

The research she was involved in was related to Lyme disease. She has partnered with a company that is developing a portable real-time device to detect if a tick is harboring the bacteria that causes Lyme disease. She explains that in the future, it’s possible numerous people in this part of the country will have one of the devices.

After being in Duluth for five years, she moved to a relatively new medical school branch in Wisconsin called the Medical College of Wisconsin – Central Wisconsin, where she is currently an associate professor on a clinician-educator track. The school’s mission is to train physicians that are going to practice primary care in northern Wisconsin.

There she does some science teaching and keeps up her Lyme disease research with undergraduates but primarily helps coordinate the school’s community-based research programs, which every medical student is required to participate in.

“During a Ph.D. and postdoc you pick up so many transferable skills like persistence, troubleshooting, and problem solving that are so valuable no matter what career you end up in,” Prunuske says. “You are also open to new challenges and experiences because you’ll work on so many different things during those postdoc years. That can be very marketable in a changing scientific landscape.”