Spotlight on faculty and staff researchers 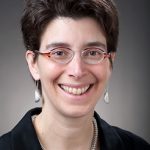 Babies are full of surprises. And no one is more aware of that fact than Jenny Saffran, a UW-Madison professor of psychology.

Saffran has tested 1,500 babies a year since the Infant Learning Lab at the Waisman Center opened in 1998.

The focus of her lab is to study how infants develop cognitively and in particular, how they acquire language.

“We’ve known for a long time that babies acquire language rapidly,” she says, “but what we haven’t known is how they do it.”

Understanding the extraordinary learning abilities infants possess, Saffran says, will help us to move beyond nature versus nurture to a better understanding of how our learning systems interact with the complexities of human environments.

Saffran has demonstrated that infants use statistical learning, or the practice of detecting consistent patterns in sounds, as a foundation for learning language.

About two-thirds of her research is with typically developing babies trying to figure out how they learn their native language. The remaining one-third of her time is spent using the same methods to try to understand language learning in infants and young children who have developmental disabilities.

Saffran is one of three primary investigators for The Little Listeners Project, a research study focused on early language comprehension in young children, including toddlers who have autism spectrum disorder (ASD). This project is funded by a grant from the National Institutes of Health.

Language and communication delays are one of the hallmarks and earliest signs of ASD. Although a great deal of research has focused on overall language abilities in children with ASD, we know very little about how these children understand language in real time, as they are hearing it—something referred to as language processing. Understanding how children with ASD comprehend language in real time is important because this is a skill they use all the time in their daily lives. This study is being done in collaboration with her colleagues in the Department of Communication Sciences and Disorders.

Her laboratory employs a variety of experimental approaches including eye-tracking. This is a powerful method because it measures children’s language comprehension implicitly, without asking them to push a button or answer a question verbally. The eyetracker is able to record exactly which part of the screen the infant is looking at throughout the experiment and which images they pay the most attention to.

Saffran’s work has wide ranging implications and embodies the Wisconsin Idea – that education should influence people’s lives beyond the boundaries of the classroom.

“Every parent wants his or her child to engage in the best outcomes and be as successful as possible,” Saffran says. “Hopefully by understanding how it is that infants learn their native language, or in the case of bilingual children their native languages, we can help to ensure that infants are experiencing the kind of environments that are going to foster the healthiest kinds of development.”

Saffran’s interest in babies began as a teenager growing up on the East Coast. When she was in high school she joined a program to earn science credits by volunteering in a lab. Her neighbor, for whom she babysat, ran a lab that studied infant cognition and language.

“I started volunteering in her lab when I was a junior in high school,” Saffran recalls. “I got really interested both in the questions – nature vs. nurture and why are we who we are — but also in the methods and how we can figure out what a baby is thinking when they can’t tell us.”

Saffran then went to college and “flirted with 20 different majors,” but in the end came back to those questions.

Saffran joined the UW-Madison Department of Psychology faculty in 1997 after earning her Ph.D. from the University of Rochester.

“I came to Madison and immediately fell in love with the institution and the community,” she says. “Now I have two kids, 12 and 14, who bleed green and gold.”

Saffran’s children attended pre-school at the Waisman Center, an inclusion program where children with developmental disabilities learn and play together with typically-developing children, and she said touring the preschool was one of the things that convinced her to come to work at the UW.

“I was given a tour of the preschool and it was a very cool place,” she recalls. “I thought that if I ever had children of my own I wanted them to go to school at the Waisman Center.”

Saffran said she was also attracted to UW-Madison because it is a public university.

“I wanted to work at a place where the students come from all walks of life, and I wanted to be at a place that integrated teaching and research, and where I would have a lot of opportunities to develop my own voice in each of those areas,” she says. “I also really like that the UW is an institution of faculty governance where faculty have a lot of say over what we do. I feel privileged to be in a place where we have a voice.”

Saffran has dedicated much of her time to service on campus and currently chairs a committee for the Dean of Letters and Sciences on excellence in teaching and learning, charged with coming up with creative ideas to enhance the student learning experience on campus. She also runs the Psychology Department’s Honors Program and has chaired the Chancellor’s teaching award committee.

She is a mentor and says it is one of the most important parts of her job, but is also the part of her job that keeps her awake at night, worrying about how she can help her students land their dream jobs in an economic climate that does not make that easy.

“I’ve had an amazing group of students over the years who are teaching at universities all over the country and have their own graduate students now,” she says. “I go to conferences and meet my grandstudents and great grandstudents. It makes me very proud.”

Saffran says she loves sharing her knowledge with her undergraduate students and that they play a key role in her lab work, helping by doing research.

“I help students to understand where knowledge comes from and how to come up with a question and actually answer it,” she says. “That’s an amazing experience for students. My goal is to have students question everything they read and to think critically about what they read.”

She teaches courses ranging from first-year undergraduate seminars to large lecture courses and advanced graduate seminars. Every year Saffran has a couple of students who do their senior honors thesis with her.

For her work in research and teaching, Saffran has received numerous awards. Earlier this year Saffran was awarded a Kellett Mid-Career Faculty Researcher Award. The Kellett awards recognize outstanding faculty seven to 20 years past their first promotion to a tenured position.

She says she likes to think that somewhere in one of her classes is the future governor of Wisconsin.

“I ask myself, what do I want the future governor of Wisconsin to be thinking about with respect to child development in 20 years. They aren’t going to remember the specific studies that I talk about or the statistics that I mention,” she says. “But maybe they will remember the social justice issues that I emphasize and will be thinking about the policy issues that we discuss.”

She also knows many of the students in her classes will be parents someday.

“I’m not going to give them parenting advice,” she says. “But hopefully I can give them the analytic abilities to make good decisions for themselves as parents when they have their own children.”

And that brings her back to babies. A topic that, like parenting, she knows very well.

“When I first started studying infant language learning, there was very little data on infant learning. We knew that babies must be good at learning because they learn so much so quickly. But if someone had told me 25 years ago just how good infants are at learning I wouldn’t have believed them,” Saffran says. “So when I look back at all of the research that has come out of my lab and my colleagues’ labs about just how incredibly rapidly infants learn without having instructions, without us telling them what to learn, they are remarkably skilled at learning information. They are even better at it then I ever imagined.”