It was a book that not only launched his career, but helped move mysterious viruses into mainstream conversation.

David O’Connor, UW-Madison Professor of Pathology and Laboratory Medicine, a leader in HIV vaccine research and leader of the University of Wisconsin’s Zika project, recalls being an undergraduate at the University of Illinois at Urbana-Champaign when he read The Coming Plague: Newly Emerging Diseases in a World Out of Balance by Laurie Garrett. The critically acclaimed book documented the outbreaks of diseases around the globe, such as HIV and Ebola, and explored the reasons such viruses have not yet been vanquished.

“It changed my life,” O’Connor says, about reading the book. “I learned that infectious diseases were going to be a major threat in the future and it made me want to be part of the worldwide research team that would study them.”

He says that what really stuck with him, was that after the development of antibiotics and vaccines, there was a brief period when it seemed like studying infectious diseases was a dead end job because people were going to have conquered all of the viruses.

“Now, clearly we can look back and see that we were really naïve,” he says.

And in some ways, he contends, we are still naïve.

“We still don’t have a great handle on what sorts of infectious disease threats are going to challenge us in the future and there is a lot that we need to do to understand the diseases that are present now, as well as the ones that we are going to face in the future,” O’Connor says.

That’s why in 1997, O’Connor came to UW-Madison to study infectious diseases from some of the best.

“It was really cool because you had all of these faculty at UW-Madison who were studying different types of infectious diseases, and I fell in with David Watkins who was an HIV researcher at the time,” he recalls.

O’Connor earned his Ph.D. in medical microbiology and immunology from UW-Madison under Watkins’ mentorship.

Today, O’Connor is himself a mentor and balances his time between traveling – he is in strong demand as a speaker and consultant – and his work at the AIDS Vaccine Research Labs at University Research Park and the National Primate Research Center at UW-Madison where he is the Associate Director and Head of Research Services as well as Chair of the Global Infectious Disease Division.

“I’ve been very lucky that I have been able to pursue a research agenda that looks at how HIV evolves to avoid immune responses. I’ve been able to study how our immune responses determine how well or how poorly we do once we are infected with HIV, and how drug regimens that are being used all around the world can cause the virus to adapt and become resistant,” he says. “We now have about 35 years of studying HIV and we have a fairly good handle on the dimensions of the problem. But what is the next HIV going to be? Is there going to be something else that will emerge that will be as much of a concern in the future as HIV has been?”

To answer these big questions, O’Connor has formed collaborations with others on campus and around the world. It was through these collaborations that he became interested in emerging primate viruses in Africa that could threaten human health in the future.

“It suggests that we are looking only at the tip of the iceberg and that there are large numbers of undiscovered viruses,” O’Connor says.

Along the way, they also had to address critical technical challenges.

“We had to consider that if you have a virus from an African monkey and you want to study it in a lab and you don’t know anything about it, what sorts of safety guidelines do you need to put into place?” O’Connor recalls. “And if you want to test how that virus behaves in an animal, how do you decide what is a safe experiment to do, and what sorts of safety and biosecurity measures do you have to take?”

In October 2015, O’Connor and his wife, Shelby O’Connor who is a UW-Madison Assistant Professor in the Department of Pathology and Laboratory Medicine, were giving an HIV talk in Brazil when a Brazilian colleague pulled him aside and shared that babies there were being born with small heads. Some suspected a virus was the cause and he asked if O’Connor would help.

“We realized that a lot of the previous work we had done in our lab was also going to be applicable to Zika, and we were positioned to study Zika at UW-Madison,” he says.

O’Connor quickly also realized that with Zika, he needed additional expertise and called on people like Jorge Osorio of the School of Veterinary Medicine who studies insect-borne viruses, fetal medicine specialists who study high risk pregnancies, obstetricians including nonhuman primate obstetricians, and others. Soon, this team was receiving vials of the virus isolated from around the world and injecting pregnant rhesus macaque monkeys with the virus to start exploring how Zika affects developing fetuses.

As the team working on Zika grew, O’Connor needed to find a way to loop everyone in on the results. O’Connor had an idea: Why not just post everything they found online for public use? Other researchers — even those in other countries — could use the data to avoid unnecessarily repeating experiments that had already been done. Vaccine makers could look to the data for real-time updates. The general public could learn about research underway at UW-Madison to study a public health emergency.

It would help get past the issue that vital data on the Zika epidemic could be held up by journal peer review that in some cases takes more than a year.

“One of the most exciting parts of working on a public health emergency is contributing relevant data,” O’Connor says.

The Zika Open-Research Portal, which was launched in February 2016, facilitates collaborative research by providing a platform for investigators to make Zika research data, commentary and results publicly available in real-time. He acknowledges that the approach raises questions about vetting the data for accuracy and making sure that it isn’t misappropriated. But when the clock is ticking, he argues, it’s necessary to move fast.

It’s a new approach, but not a new idea.

“This approach embodies the Wisconsin Idea because we are generating knowledge here at UW-Madison, but people all over the state, and even the world can learn from our successes and failures,” O’Connor says.

O’Connor is especially interested in teaching the next generation of scientists.

Among the classes he teaches is an undergraduate course, “HIV: Sex, Society and Science,” which is cross-listed in the Departments of Pathology and Laboratory Medicine and the Pathobiological Sciences. The course, which is team taught, does not require science prerequisites, so for some students it is the only science course they will take while at UW-Madison. It also satisfies one of the communications requirements and for some students it is opportunity to write and communicate scientifically. While it is a class on HIV, because HIV is such a fast moving field, the instructors use HIV as a lens through which to think about complex problems that don’t have easy solutions.

“We teach students how to assess information critically and think like a scientist and use the scientific method,” O’Connor notes.

Class content is changed each year as they bring in other infectious diseases that are current and relevant. Some of the students who have taken that class have gone on to do great work in the HIV community not only as scientists and doctors, but as Peace Corps volunteers and working with NGOs.

He also enjoys having undergraduates and graduates working in his lab. Last year he was introduced to the Youth Apprenticeship Program, which matches highly motivated high school students with research labs. O’Connor even has students who come from Brazil to work in his lab.

“Right now a lot of people have been discouraged because the climate for doing biomedical research is challenging,” O’Connor contends. “But, it’s also a time of unprecedented opportunity where we have incredible tools that we can use to ask really important questions about the nature of life and biology, and how things work. And these tools are only going to get better. My advice to students is that if you love science, follow that path. Science is a global activity – a global enterprise – and it’s an exciting time to be doing science.” 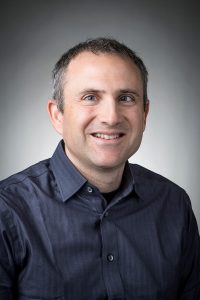 David O’Connor, professor in the Department of Pathology and Laboratory Medicine at the University of Wisconsin-Madison, is pictured on April 19, 2016. (Photo by Bryce Richter / UW-Madison)