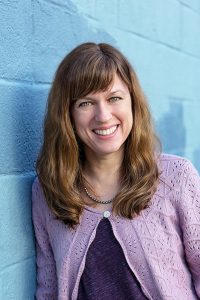 For UW-Madison professor of communication sciences and disorders Katie Hustad, research is a lot like running a marathon.

“There is no immediate gratification in research,” says Hustad, a long-distance runner in her free time. “You have to make peace with the fact that nothing comes over night. It’s just like running — you don’t just step in and run a marathon. You have to work toward that goal. If today you can only run three miles, then that’s what you do. But every day counts and you have to keep plugging away and pushing forward. That forward momentum builds capacity to ask and answer important questions, to try to address problems that matter, to make a difference in the lives of people with disabilities.  The perseverance and the effort all add up in the end.”

Hustad chairs UW-Madison’s Department of Communication Sciences and Disorders and is the principal investigator for the Wisconsin Intelligibility, Speech and Communication (WISC) Lab at the Waisman Center.

Research in her laboratory for the last 12 years has focused on characterizing changes in speech production, speech intelligibility, language, cognition, and functional communication abilities among children with cerebral palsy beginning at the age of 18 months and continuing through adolescence (and ultimately through adulthood).

Cerebral palsy is the most common cause of severe motor disability in children, affecting three per 1,000 in the United States and internationally. Up to 80 percent of people with CP have some type of difficulty with communication, but very little is known about the specific nature of these problems, how they change as children grow, or how to treat them. As a result, many children who have CP do not receive appropriate intervention until they experience significant communication failure.

Hustad’s research has been funded by the National Institutes of Health since 2003, and Hustad is following 100 children with CP over time to understand the ways that their speech, language, and communication abilities develop and change as they grow up.

Results of this research are already having important clinical implications, leading to the advancement of interventions that could ultimately lead to better long-term communication outcomes and quality of life for individuals with CP.

“It has been an amazing experience to watch our children with CP develop into teenagers — many the same ages as my own children,” she says.

“In many children with cerebral palsy there are very obvious disabilities from the earliest ages,” she notes. “But there are also some children with CP who are borderline in their speech development and we don’t know if they will have communication trouble or not.  In many cases these children have the best prognosis for improvement with speech therapy because their CP is less severe, but right now we don’t have tools to differentiate early signs of speech problems from normal developmental speech errors.”

Her research will help understand what the normal range of speech intelligibility is for children between 3 and 7 years of age.

“We want to know how understandable a typically developing child should be at various ages so that we can set some benchmarks – functional standards – that let us pinpoint problems beginning at age 3.  For example, if we see a 4-year-old child who is 72 percent intelligible, we want to be able to determine whether that number is within the range of expectations for 4 year olds and if not, how far away from “normal” that child is” Hustad says.

For this study, Hustad is recruiting 400 children, ages 3 to 7-year olds, over the next four years.

“I think this research will have a huge impact when it is all said and done, on the way we think of speech disorders not just in children with cerebral palsy but in all types of children such as those with developmental articulation disorders, hearing impairments, cleft palate, as those with other speech motor disorders,” she says. “The hope is that by establishing benchmarks, we will get these kids into therapy sooner, rather than waiting until they are older and really struggling to communicate. It’s easier to remediate everything when you are younger.”

“It’s an exciting time for me,” she says. “I love that my research has direct clinical implications and can improve the quality of life for people who have disabilities.”

Hustad is a Wisconsin native and completed undergraduate studies at UW-Eau Claire before earning a Master’s degree at UW-Madison in speech language pathology. After graduating, she felt a pull to experience life beyond Wisconsin’s borders and worked as a clinical speech-language pathologist.

She moved to Washington D.C. to conduct clinical work with adults who had autism spectrum disorders, and later moved to Philadelphia to work at a children’s hospital as a speech language pathologist specializing in augmentative and alternative communication (use of voice output assistive technologies such as laptops – and now iPads).  It was during that time she became interested in people with cerebral palsy and decided to get her Ph.D.

“I saw a lack of research in the field and problems with determining the best interventions for people who were not able to speak or had limitations in using speech to meet their communication needs,” she recalls.

At the University of Nebraska at Lincoln she focused on augmentative and alternative communication with an emphasis on interventions for adults with neurologically based (motor) speech disorders.

Her first faculty job was at Penn State and that’s where she became interested in working with children. She also had her first child during that time.

With that change in research focus came the opportunity to return to Madison and work at UW-Madison.

“My work was directly tied to the mission of the Waisman Center, which is to improve the lives of people with developmental disabilities and neurodegenerative diseases,” she says. It was a perfect fit for me.”

Part of improving those lives is teaching the next generation of speech-language pathologists at UW-Madison.

At the graduate level, Hustad teaches in the areas of Augmentative and Alternative Communication and Motor Speech Disorders.

She also teaches Introduction to Communication Sciences and Disorders to undergraduates. It’s a class comprised mostly of students majoring in other fields who are fulfilling breadth requirements, including students in business, engineering, nursing, and education.

“With this class, my focus has been on what these students need to know about communication disorders so that they can be better citizens of the world.  After taking my class, I want students to be more sensitive to people with a wide range of disabilities and communication challenges who they undoubtedly will encounter in their lives,” she says. “I want them to appreciate that not everyone is able to communicate effortlessly and to have some idea of the underlying reasons why someone might be having problems.  If you have this basic knowledge, you are a lot less likely to be afraid or to judge people who are different.  Mostly importantly I want students to know that regardless of abilities or disabilities we are all people before we are any label.”

Hustad asks her students at the end of the course to share three things they got out of the class. One of her favorite answers is that they learned to use person-first language.

“It’s not an autistic person,” Hustad notes. “It’s a person with autism.”

Hustad also has 10 or more students working in her lab at any time.

“These students get to meet the children with CP and their families, and look at all of the data we have collected over the last 12 years, and learn to ask and answer meaningful questions. It’s like I have a huge sandbox for students to come and play in,” she says. “I’m proud that I can let them loose in this sandbox, guide them, and give them direct experience with seeing how research can address problems that are clinically relevant.”

UW-Madison’s Department of Communication Sciences and Disorders has been ranked first or second in speech language pathology – from more than 225 training programs nationally – for decades.

The department embodies the Wisconsin Idea in that it offers a large speech and hearing clinic at a low cost to the community. Graduate students in speech-language pathology and audiology are trained in the clinic.  They then go on to serve communities around the state and nation filling a significant need as speech-language pathologists and audiologists who work directly with people who have communication disorders in hospitals, schools, nursing homes and clinics.

According to the U.S. Bureau of Labor Statistics, the average job growth rate for all occupations is 7 percent. But for audiology and speech pathology, that growth rate is 29 percent and 21 percent, respectively. The graduate programs in Speech-Language Pathology and Audiology in the Department of Communication Sciences and Disorders at UW-Madison boasts a 100 percent job placement rate for its graduates.

Hustad’s advice to students interested in entering her field is to go for it.  She says “The field of speech-language pathology is wide open and there is a lot to be done to keep the field moving forward.  The numbers of people in need of speech, language, and hearing services are growing. We need clinicians and researchers, alike.  There is something for everyone, from direct service to clinical research to basic science. Pick something that is energizing and interesting to you and to stick with it, just like running a race.”

“No one paper that I publish is going to be my quintessential contribution,” Hustad says “But I hope someday that the body of my work—all of the papers and all of the students who have worked with me—will be. I hope people will look at me and say, ‘she changed the way we think about people with cerebral palsy and how we serve those people.’ The big carrot for me in my research, teaching, and service is the impact the work has on people at the end of the day.”