Music emanates from the offices down the hall – a bright note in the otherwise nondescript hallway on the fourth floor of the George L. Mosse Humanities building. The sounds don’t seem to distract Sally Chisholm, though, from her own work – practicing Grosse Fugue Op. 33 of Beethoven. For Chisholm, music is how she best communicates. It’s who she is and where she came from.

Chisholm grew up, one of three girls, in an Oklahoma home where music was revered by her father, a football coach, and played by her mother, a pianist.

“A love of music in the home is one of the best indicators of someone who will want to do music more than whatever is the profession of the parents,” says Chisholm. “And I had that.”

Chisholm learned to play music at a young age in the public schools but didn’t think to pursue it professionally, instead turning to philosophy as an undergraduate in college.

But then something happened to change all of that in college and she turned to music in her graduate studies.

“For musicians, the moment you make a commitment to music is a special moment,” she says. “For me it was listening to Mozart. By the last movement I knew that was what I wanted to do for the rest of my life.”

After an extensive career in chamber music at UW-Madison where Chisholm has worked since 1991, she now serves as professor of viola in the School of Music and as artist in residence and member of the Pro Arte Quartet — one of the world’s most distinguished string quartets.

Chisholm, who plays viola in the Pro Arte Quartet is joined by violinists David Perry and Suzanne Beia, and cellist Parry Karp.

Founded by conservatory students in Brussels in 1911, the Pro Arte Quartet became one of the most celebrated ensembles in Europe in the first half of the twentieth century. The Pro Arte frequently toured the United States and was performing in Madison in May 1940 when Nazi forces invaded Belgium. The University of Wisconsin responded by offering the quartet a permanent campus home, the first such arrangement at a major American university. The UW Pro Arte residency became a model of artist residencies that is now widely emulated throughout the country.

Today, the Pro Arte Quartet performs throughout the United States, Europe, and Asia and continues to champion equally both standard repertoire and new music.

Chisholm is also a widely recorded music ambassador in her own right and performs annually in the Festival Der Zukunft in Switzerland and the Marlboro Festival in Vermont, which provides an opportunity for the top young chamber musicians to work with leaders in the field.

Chisholm was a founding member of the Thouvenel String Quartet and the Chamber Music Society of Minnesota, where she has performed with artists such as Leon Fleisher and Yo-Yo Ma.  She has also performed in more popular contexts, such as on the Today Show.

Since 2008 she has given over 60 concerts both nationally and internationally and has participated in numerous prestigious festivals. For example, she has toured in China and Tibet, and performed as part of an American piano quintet in North Korea. Chisholm won first prize at the Weiner International Chamber Music Competition and was a Naumburg Competition finalist. When she travels for performances she also gives clinics and teaches classes.

Add to that, she is a board member of the American Viola Society, and earlier this year was named a Wisconsin Alumni Research Foundation professor and earned the title of Germain Prevost Professor of Music.

Her research, she says, is about performance and discovering new music.

She enjoys sharing what she has learned when performing abroad with her students when she returns to UW-Madison. Her lessons – she teaches undergraduates through doctoral students — consist of one-on-one studio instruction.

Her approach to teaching and learning comes from the advice of her own mentors, one of whom told her, “If your approach to learning is such that you get better every day of your life, then you will have a happy life – and not learning something rote but something very alive.”

He added, “Give tools to students so that they can get better every day of their lives. Do not teach ‘Here’s how I do it,’ but ‘Here’s how you can grow.’ He did that for us as musicians and as instrumentalists.”

It is a pedagogy she follows now herself, helping students find their own distinctive voices and interpretations.

“Our aim is to see that those we teach become greater than we are. And we are doing pretty well at that,” Chisholm says.

She takes pride when a student becomes a virtuoso and goes on to become a music professor or plays with the Boston Symphony Orchestra, as some of her students have done.

The quality of students at UW-Madison is one of the main reasons Chisholm is here.

“I love the repertoire and curious-minded students,” she says of UW-Madison.

She says performing alongside her musical heroes, pianist Leon Fleisher and violist Samuel Rhodes, formerly of the Julliard String Quartet, and becoming friends with them, was instrumental in teaching her how to help others.

Chisholm notes, “One of my teachers once wrote, and it makes so much sense to me, ‘If it’s what you love, there is room for it. And if you love your work, you will find a way that you can do it.’”

For Chisholm, working at UW-Madison seems to hit all the right notes. 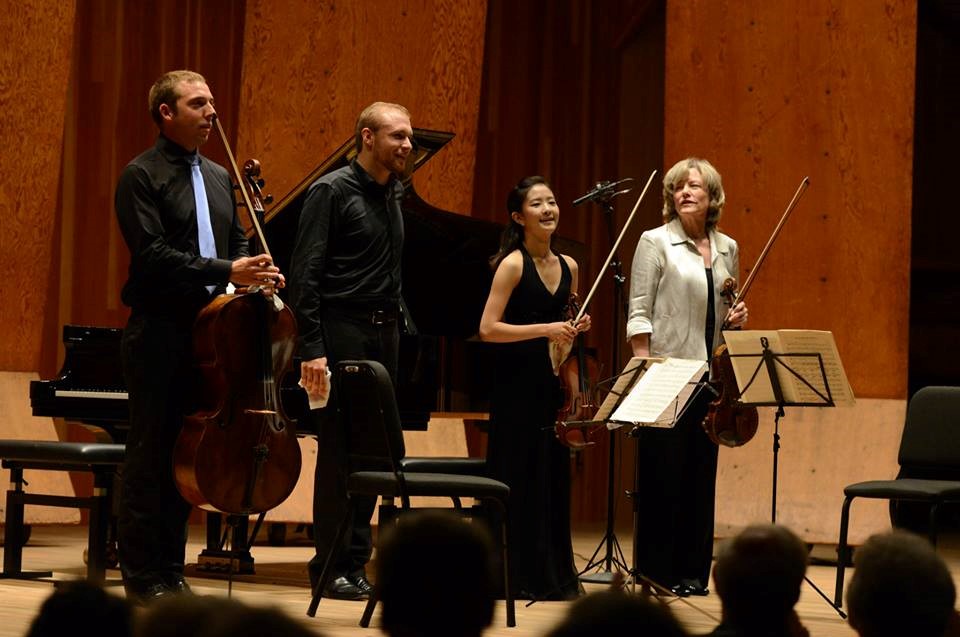