This document describes Good Clinical Practice (GCP), provides investigators, sponsor-investigators, and study teams with a decision tree to determine if their research must follow the standards described in GCP, and includes detailed guidance about what it means to follow GCP.

What is Good Clinical Practice (GCP)? The term GCP is used interchangeably in reference to both a broad concept and a single document.

GCP is often used broadly to describe what are considered best practices when conducting clinical research. These practices set the standards for designing, conducting, performance monitoring, auditing, recording, analysis, and reporting of clinical research that involve human subjects. Compliance with this standard helps to provide public assurance that the rights, safety, and welfare of human subjects in research are protected; that the research is consistent with the principles that have their origin in the Declaration of Helsinki; and that the data collected are reliable and credible.

The term GCP is also used more narrowly to describe the International Council for Harmonisation (ICH) GCP E6 document itself. GCP describes the unified, international standard for the European Union, Japan, the United States, Canada, and Switzerland to facilitate the mutual acceptance of data from clinical trials by the regulatory authorities in these jurisdictions.

The applicability and application of GCP differs based on the specifics of the study. Use the decision tree below to help determine if GCP applies to your study. Click on the links below the tree* for additional information contained within this document, as well as other external resources. 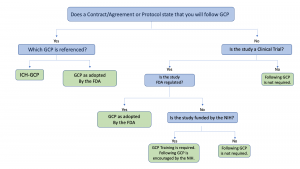 *Links to assist with answering questions:

How are ICH GCP and GCP as adopted by the FDA related?

ICH GCP Guidelines should be followed when generating clinical trial data that are intended to be submitted to international regulatory authorities. In protocols or contracts/agreements, when the international standards are to be followed, it is referred to as ICH GCP.

The United States Food and Drug Administration (FDA) adopted the ICH GCP E6 (R2) Integrated Addendum as guidance in March 2018. FDA regulated clinical trials must follow the aspects of GCP that are consistent with the applicable FDA regulations. The aspects of GCP that are not otherwise described in the FDA regulations are considered guidance, similar to other FDA guidance. Refer to the table at the end of this document.

As it pertains to the conduct of clinical trials using an investigational product involving human subjects, study teams are expected to apply GCP encompassed within the applicable FDA regulations including 21 CFR 11, 50, 54, 56, 312, 812 and 814 (subpart H).

Does the National Institutes of Health (NIH) require that I follow GCP on studies for which they provide funding?

NIH encourages researchers to follow GCP as best practice for NIH funded clinical trials, but does not currently require that clinical trials comply with GCP. The NIH requires training in GCP to help ensure the safety, integrity, and quality of clinical trials.

What does it mean to follow GCP as adopted by the FDA?

What if I am supposed to follow GCP as adopted by the FDA, but don’t?

If I am conducting and FDA regulated trial, do I need to follow GCP criteria that are not within FDA Regulations?

The FDA recommends following GCP guidelines within its guidance documents. In the Introduction of the FDA’s guidance on GCP, it states, “In general, FDA’s guidance documents do not establish legally enforceable responsibilities. Instead, guidances describe the Agency’s current thinking on a topic and should be viewed only as recommendations, unless specific regulatory or statutory requirements are cited. The use of the word should in Agency guidances means that something is suggested or recommended, but not required.”

UW-Madison practices for citing findings are aligned with FDA expectations as noted above. As such, if a study is not FDA regulated and there is no contract requiring application of ICH GCP criteria that have not been adopted by FDA, study teams will not be cited for not following ICH GCP guidelines that are unique to ICH GCP (i.e., those that do not appear in FDA regulations) unless the lack of doing so presents a more significant potential impact on subject safety or data integrity.

What if my contract or protocol states that ICH GCP will be followed? How does ICH GCP compare to FDA regulations?